Conan O'Brien was beginning his new late-night comedy show on TBS and for the premier, Turner Broadcasting was hosting a small pre-launch party for the press. They hoped to create a promotional memento for the party to ensure that media personnel continued to think about Conan even after the night was through.


The customer came to IASpromotes.com knowing exactly what they were looking for. The press party was "lounge" themed – come in, relax, have a good time, laugh at a few jokes, leave feeling happy. The point of the party was to get everyone hanging out. So the customer wanted the couches arrayed with customized Conan throw pillows, and when the guests left, they were welcome to take a commemorative pillow as a thank you gift.

The pillow served the general atmosphere of the party, but also simultaneously worked very well as a promotional item in support of a larger advertising campaign. The pillow was created in a bright orange, Conan's signature color, and emblazoned in white with the simple message "Conan," "Very Funny".
The only impediment Turner Broadcasting foresaw was that the party was in only three days. IASpromotes.com has no problem with rush orders and offers hundreds of Quick Ship Items. To expedite the process even more, IASpromotes.com had the pillow stuffing shipped immediately, and then the next day when the covers were sewn those were overnighted separately. The customer assembled the custom promotional items the afternoon before the party. 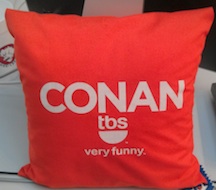 The party was a smashing success. All of the pillows were taken at the end of the evening as the press members guffawed their way out the door. Conan premiered to rave reviews and the pre-launch media party is said to have certainly aided in the cheerful disposition in which many of his reviews were written. Of course, Conan's wit and charm surely aided the positive reviews, as well.

For specific Ad Specialty Items utilized in this case study, please visit Promotional Pillows and Bedding
Keep up to date with all of Conan's hilarious antics at TBS. Very Funny.

We always encourage you to email us with any questions or if you'd like advice for your next promotional event at: greatideas@IASpromotes.com