An automotive company was participating in a major auto show and needed promotional ad specialties to be distributed at their booth and promote their local Auto Workers Union as well. They were interested in a promotional product that would advertise their brand effectively but could also be given away in high volumes.

The auto company had a number of requirements for the product. Foremost, the product had be USA Union Made. They were also looking for an ecofriendly promo product that was both recyclable and made from recycled materials. Finally, because the customized specialty items were going to be handed out in such high volumes, the company wanted each product to cost less than one dollar each.


The annual auto show was being held in Cleveland, Ohio. The automotive company and IASpromotes.com wanted to create a customized product that would not only serve as a promotional marketing tool but would also but useful to attendants as they perused the booths. Together, a reusable logoed sports bottle was decided upon.

The promotional merchandise was made from 100% recycled materials, was recyclable, and cost just 85 cents per product. Most importantly, the water bottles were certified union-made products constructed in the United States of America. The company chose a black water bottle with a red top, which matched other promotional advertising materials the company was using in their current marketing campaign. Their name and logo was emblazoned on the bottle in white. 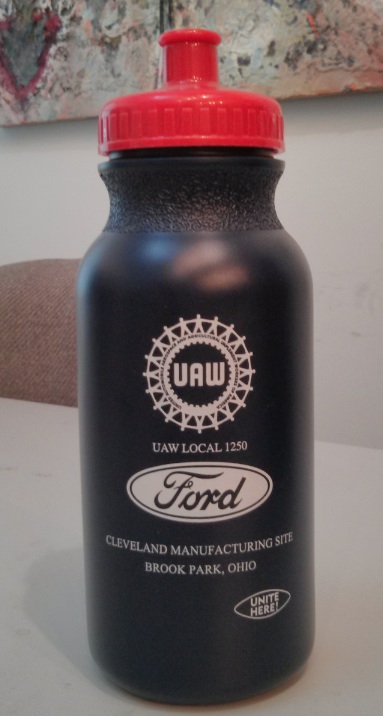 The automotive company ordered 8,500 custom-printed promotional water bottles. By the end of the show, all of the bottles had been distributed to potential clients. Six months after the auto expo, the company's sales had increase 3%. The company attributed the rise in sales to increased recognition from the promotional advertisement at the auto show in conjunction with simultaneous other marketing efforts.

For other great Drinkware customized product and event ideas: Drinkware Promotional Items
And be sure to also consider our extensive selection of Eco-Friendly Promotional Products

For specific Ad Specialty Items utilized in this case study, please visit Reusable Sports Bottle
To discover more about the benefits of unions and union-made products, take a look at United Auto Workers

We always encourage you to e-mail us with any questions or if you'd like advice for your next promotional event at: greatideas@IASpromotes.com