Six Flags Over Texas was unveiling a new ride at their amusement park, a roller coaster called "Batman the Ride." They wanted to distribute promotional giveaways to press and media outlets in order to garner attention before the premier of the new ride.

The amusement park's goal was primarily to create a buzz. Their small-scale advertising campaign, directed primarily to media personnel, opened up a multitude of unique promotional items to work from. Also because of the focus on select individuals, it was most important to them was that the promotional piece was impactful and was sure to be noticed.


When IASpromotes.com heard the tagline Six Flags was mulling over, all the pieces came together. Six Flags wanted to use the simple phrase "The time has arrived" to accompany their customized specialty item. It was absolutely clear, then, that the promotional merchandise had to be a clock.

IASpromotes.com custom cut a promo clock out of acrylic. The top half, or "face," of the clock was cut out of black acrylic in shape of the bat symbol. The bottom half was cut out of clear acrylic, and served as its own base so that the clock could easily sit a top any desk. On the base of the clock was silk-screened "The time has arrived," followed by "Batman the Ride," followed by the Six Flags Over Texas logo. The amusement park was impressed that the clocks came to an affordable $30.00 per item. 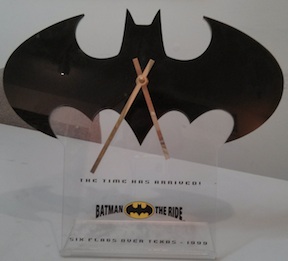 Before the ride opened it received substantial media recognition throughout the surrounding areas. It was repeatedly mentioned in the newspapers, on the radio, and on television. Due to the success of their media-targeted campaign, the ride was highly anticipated by the general public. On opening day, every single run of the roller coaster was completely full.

Whenever possible, IASpromotes.com suggests the use of unique and original promotional merchandise. These customized items tend to gain the most notice and serve your purposes in the most effective fashion possible. Also, pairing your item's image or style directly with your campaign is always an advantageous decision.

We always encourage you to email us with any questions or if you'd like advice for your next promotional event at: greatideas@IASpromotes.com