A University in Baltimore was hosting a weeklong summer program entitled "Graduate Summer Institute of Epidemiology & Biostatistics". The program began with a daylong orientation that included a walking-tour of Baltimore in order for students to orient themselves and become familiar with the city.


The university decided that in order to promote student interaction with the city, they wanted to give away specialty gifts that encouraged students to get away from the textbooks for a short while each day and involve themselves in the life of Baltimore. In order to encourage such interaction, the university decided to hand out customized pedometers so that the students would have a logoed physical representation of their efforts to see all of Baltimore.

The university chose blue pedometers that were printed in white font with the title of the program, the dates, and the location. The color-scheme was chosen to match the university's colors. At $3.00 per specialty promo product, the pedometers were a perfect match for advertising the university's program and supporting their initiatives. 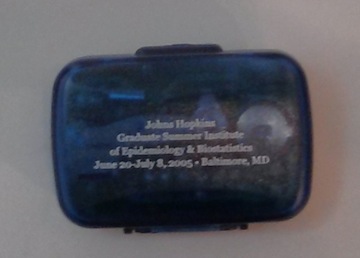 At the end of the program all students stated that the custom-printed pedometers had encouraged them to take numerous breaks from their studies and venture out to see the city. For fun, each participant's pedometer was checked on the final day and one student had taken over 150,000 steps during the weeklong program! Don't worry, all of the students performed exceptionally well in their studies, as well.

We always encourage you to e-mail us with any questions or if you'd like advice for your next promotional event at: greatideas@IASpromotes.com